Just How Much Moxy Does A Girl Have to Have? 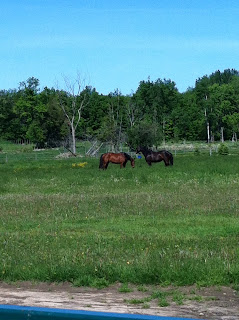 Jill was seated behind the admin desk in a Corporate and Investment Banking office tower in the big city. It was her new full time career step, and her parents and coworkers approved.

She brought her left hand to her nose again, and inhaled deeply the scent of the police horse she'd patted on her lunch break, over in Nathan Phillips Square. She could not bring herself to wash it, and suddenly realized how badly she craved equine companionship.

She googled horse trainer jobs. And came across an ad for a part time instructor/trainer in Stouffville, at a stable essentially commutable by Go-Train. When she'd called, her mentor to be had offered to pick her up at the train station. That was how Jill got back into horses, and underway on "certification" as a credential in the industry. Jill was ridiculously excited to start training at Rolling Hill Farm.
*
Her coworker asked "Can't you ride near the Science Centre? Jill sighed, "For my discipline of riding, I could never bother with a place like that."

"Oh do you jump?" Jill couldn't tell if he was making conversation or was sincerely interested in the horseness. To make her point quickly, she said "Don, I gallop off cliffs taller than you are." When he gasped she teased him, "You're not such a tall guy." Sipping her coffee she continued "That's what we call a drop jump, and they are not my specialty. So I must commute out to where there are acres of land to find one to practice...
*
Saturday morning she got up at 5 am for the commute. She was greeted in the dark stable parking lot by the giant, sweet and friendly resident black lab, aptly named Bear. He had a giant three limb branch in his mouth that she realized as he got closer was actually two parts dangling bone, and one part dangling… paw. Ew! She could see brown fuzz or fur and black toe nail claws. Gross! Assuming it was a deer leg/haunch, and a fresh one at that, she instantly decided “dogs are NOT my department,” and went inside the barn.


The other labourers were Japanese exchange students, and just arriving so there was a language barrier to add extra hilarious confusion to all of the required hard-work-as-a-team. Together they threw hay and fed grain to the horses, and began cleaning out the stalls. Before the lessons got underway, Jill was proud that she managed to catch Josh, which the others could not. It was not easy and involved a sassy lead rope around his neck (instead of putting on a halter) technique. The owner of the barn, Kate, congratulated her for this feat, when she came in moments later, by stating that “he has been easier to catch lately.”

Then, Jill got to teach her first lesson, to Laurie, a young beginner, on Josh who was obviously in a be-a-pain-in-the-neck mood. The student could not get the horse to move, and was saying “he won’t. I can’t…” so Jill was tough. “Is that what you say at the bottom of a hill when your bike isn’t going up? No. What do you do then? You pedal! Soooo, let’s see you pedal…” The rider’s friend, a more assertive, outgoing sort and a more experienced student was there, and offered to go get a crop. When she caught up with them again, whip in hand, they were out of sight of all of the adults around the barn, and Jill had her walk on the horse’s right side, and give the horse a few good taps behind Laurie’s leg to help drive him on, while the Laurie “pedaled” squeezing the horse’s sides, and Jill led on the left hand side. The whole hour was challenging, but they did get him going, and it ended up well, as it turned out Laurie could reach her hands together under his neck for a big hug before dismounting!
Then, because some potential buyers were coming, Jill was asked to ride Moxy! The big, beautiful, handsomest horse in the whole barn that Jill had adored since her very first visit at the farm! What an honour. Everyone at the whole stable actually seemed to have a crush on him (saying that Moxy knows them, seems to like them, always comes to them etc.). Maybe his celebrity was because his regular rider had just been long listed for the Olympic team. Maybe it was because he was the foal photographed on all the stable brochures. Or, maybe it was just because he is a 5 year old 17 hand Hanoverian horse who needed a strong, advanced level rider. Whatever it was, Jill was also smitten and was excited to be tacking up for her fifth time on horseback in years. She felt so rusty. And, she didn’t even have her riding pants!
It was also the first beautiful day of spring, and so, Jill was double celebrity as she got to be the first person to ride in the sand ring. She had long hoped for a chance to try Moxy and was brave enough then and there, thinking “at least if I fall off, the sandy, muddy ground will be very soft.” A crowd gathered to watch on the top of the hill – the 3 potential buyers, Kate, Dan (who farmed the land), Mich (the most advanced rider around) and a bunch of the other students. They started by lunging him in a big circle on a long lead line, and could all see he was feeling fresh. Despite the fact that he had been running up a spring fever sort of storm in the paddock all day, he bucked some more and did some cute leaps into canter. Kate was downplaying all the headshaking foolishness, but it was easy to see how fit and strong he was, as the excess energy did not wear off…

When the time came, Jill mounted and athletic, talented horse flesh vibrated under saddle as she tried just to keep her hands low and act like a rider on a calm, bombproof sort of hunter horse, like the boss whispered she should do.

The entire ride lasted only 7 minutes, which included the stirrup adjusting time!! After one or two trot circles round, one of the exchange student workers, while dumping a skep in the manure pile accidentally dropped it. So the big green plastic bucket came tumbling down the huge hill towards the looking for an excuse to freak out beast. Boing Bounce Boing Bounce Boing. Jill didn’t even know exactly what Moxy did or how she stayed on, but no one besides the horse and rider could see why he had even spooked and taken off on his bucking spree in the first place. She regained control at the far side of the ring, and made a joke about there being no charge for the circus show, just as a loose horse came trotting towards them. What the *&^% ??? Someone had accidentally let go of a horse they were leading. Moxy snorted and put his head down as if to start anew. Kate shouted “dismount!” which Jill did, fast; kicking both feet out of the stirrups and jumping down to the ground on Moxy’s left side. She said “Whoa,” firmly, and he did stand still, thank goodness.

The runaway horse was caught, as the potential buyers stumbled over one another getting into their car saying “He’s a little more horse than we’re looking for right now” and speeding off down the gravel driveway, in a cloud of dust.

Jill thought she deserved a medal because not only was she brave enough to get on such a challenging horse in frisky weather, but was lucky enough to stay on, and then managed to act light hearted about his behaviour, but Kate seemed disappointed. She said she had been counting on Jill to sell him. Oh well, Jill thought, “at least I got to practice an Emergency Dismount for my very first time
at 2:26 PM 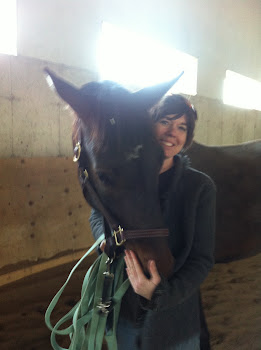